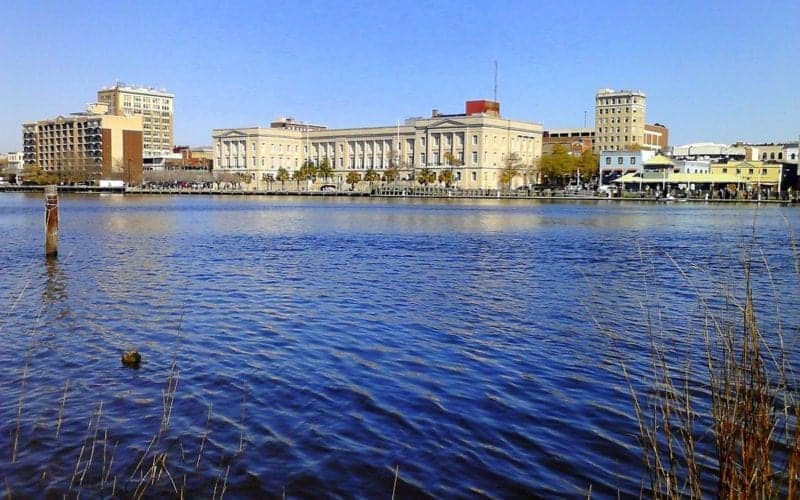 We recently published an article on the GenX water contamination in the Cape Fear river, the source of most of the drinking water in Wilmington, North Carolina. It was discovered that the majority of the chemical was originating from the Chemours Fayetteville Works site, and a lot of pressure has been put on the company (and the municipality) to deal with the situation. The following article will looks at GenX chemicals in drinking water affecting North Carolina.

GenX is an alternative perfluorooctanoic acid (PFOA) that the scientific engineering company DuPont introduced commercially in 2009, as a safer means of producing Teflon and other products.
At the time, the company filed numerous statements testifying that GenX chemicals were likely dangerous to humans. Unfortunately, these statements were largely disregarded, and the Environmental Protection Agency (EPA) granted DuPont a consent order. Chemours, a DuPont spin-off company, took the contract.
GenX chemicals have since been found in North Carolina drinking water, particularly around Wilmington. A 2016 study came to light in early June this year, which gave rise to publicity on the issue.
The Cape Fear Public Utility Authority (CFPUA), North Carolina Department of Environmental Quality (N.C. DEQ), and EPA have been under mounting pressure by community members – represented in large by Wilmington Mayor Bill Saffo – to better regulate the GenX discharge.

GenX and other PFOA compounds are incredibly stable in their chemical make-up, which is why they are a popular component in the production of Teflon and other household items. Unfortunately, this also means that GenX remains present in water almost indefinitely.

Because it’s a “water-loving chemical”, researchers have had difficulty studying the behavior of GenX in water, but as a biopersistant compound it’s estimated to remain present in the human body for as long as three years.
This poses a serious problem. While the exact effects of the GenX chemical on human health are largely a matter of speculation at present, other PFOA agents are known to be carcinogenic. In fact, DuPont conducted several studies between 2006 and 2013 that concluded GenX has created reproductive problems, and even tumors, in lab rodents.

Also known as C6, GenX is highly similar to another DuPont chemical, C8, which was phased out after its carcinogenic properties were determined. The numerous class-action lawsuits resulting in a $671 million settlement, in addition to the $16.5 million fine DuPont and Chemours had to pay the EPA for not having disclosed its potential health hazard. Despite the above mentioned internal tests, both companies have stated that the GenX chemical is safer than C8.

Disturbingly, it recently came to light that North Carolina drinking water from the Cape Fear River has contained traces of GenX chemicals since 1980.

One of North Carolina’s prominent port cities, and New Hanover County seat, Wilmington has been in the fore of public outcry against the water contamination. Situated about 100 miles downriver from the Fayetteville Works site responsible for the majority of chemical discharge into the Cape Fear River, Wilmington sources the majority of its drinking water from the last 35 miles of the 202 mile long backwater river.

On Wednesday June 21st, a GenX Community Forum was hosted by the Cape Fear River Watch at the Coastline Conference Center in Wilmington. There were several notable forum panelists, including Professor Larry Cahoon, a biological oceanographer specializing in water quality analysis and remediation at UNC Wilmington, and his colleague Susanne Brander, an ecotoxicologist.

According to Napoli Shkolnik PLLC, one of the attorney groups that worked on the class-action lawsuits mentioned in the previous section, there is substantial evidence that the water in Wilmington’s GenX chemical contamination may lead to numerous chronic health issues. These include liver, testicular, and pancreatic cancer, liver and kidney disease, and uterine polyps.

Dr David Hill, another forum panelist and a local pediatrician, also points out that PFOA chemicals are endocrine disruptors. Such chemicals wreak general havoc on the body, and are especially dangerous for children and teens.

Brander testified that GenX doesn’t penetrate the skin, so bathing would still likely be safe. When it comes to using tap water to wash food, however, she said she was still “on the fence”.

Reference was made to the studies performed so far by another UNC Wilmington faculty member, Dr Detlef Knappe, which were published last November and only recently brought to light.
Dr Cahoon called the water in Wilmington “a cocktail”, pointing out that Dr Knappe’s study shows that North Carolina drinking water is contaminated with several PFOAs – not only GenX.

As referenced in our previous article, the community – led by Mayor Saffo – has put forward requests that the EPA and North Carolina DEQ enforce a suspension of all activities leading to the GenX discharge. Chemours remained adamant that they were unable to prevent continued discharge, but that the levels of GenX in North Carolina drinking water were of a safe level. However, the company has recently amended this stance.
Following the launch of an EPA investigation, and the beginning of DEQ sampling Cape Fear water, Chemours announced that the GenX discharges would stop.

As part of their investigations and testing of the water in Wilmington (as well as other stretches of the Cape Fear River), scientists discovered elevated levels of the 1.4-dioxane chemical.

Echoing results from tests on GenX, 1.4-dioxane has been found to cause liver and kidney damage when the compound was introduced to the drinking water of laboratory rats. Further tests were performed on humans exposed to 1.4-dioxane as part of their jobs show no conclusive evidence that the compound is linked to cancer, but the EPA has listed it as a probable human carcinogen.

An industrial solvent, 1.4-dioxane is found in varnishes, soaps, make-up, paint strippers, and antifreeze. The EPA, who have listed it as a probable human carcinogen, has also identified it as one of thirty chemicals that need to be properly studied. Their short term goal is to determine whether or not such compounds are indeed harmful to humans, so that they may set regulations for tracking them. Unfortunately, it can take as long as 20 years for newly discovered chemicals to be federally regulated, which presents a major immediate problem for residents exposed to a contaminated water supply, as well as long term issues.

The DEQ has been looking into the levels of 1.4-dioxane in the Cape Fear River basin since 2015. The chemical is now found to be present at an average two parts per billion, which is nearly six times the considered safe contaminant level. Alarmingly, some areas have yielded results as high as eleven parts per billion (admittedly an impressive drop in just a year from 351 parts). These areas – Harnett County Public Utilities, Lillington, Kelly, and Fayetteville – have been identified as primary focuses, with the highest levels of 1.4-dioxane contamination.

This poses a natural concern for residents of Wilmington, who are situated about 100 miles downriver from Fayetteville.

The Way Forward in the Wake of GenX Chemicals

Kemp Budette, the Cape Fear Riverkeeper, has added his voice to the public movement to having contaminants like GenX in North Carolina drinking water removed. His group will be pushing for a binding legal agreement between Chemours and the CFPUA to have the discharge of GenX chemicals stopped on a permanent basis.

Chemours’ state waste water discharge permit has also expired. At present, the permit includes no requirements for the company to disclose the presence of GenX, which Burdette has rightfully exposed as unethical.

As the permit is up for review, Burdette and his group intend on requesting that the DEQ add further restrictions to its upcoming renewal. They also plan to insist that the DEQ include river sediment in their studies of water in Wilmington and elsewhere in the state. Burdette would also like to see the EPA extending their investigations beyond discharges too.

Unfortunately, it may not be as viable an option as one would hope for. There is a severe lack of funding for both university and government-based research on emerging contaminants. This means the biased in-house testing paid for by chemical companies is often the final say in the matter for decades.

The EPA is currently facing a 30 percent budget cut, and the DEQ’s proposed budget is also cutting out key functions. Worryingly, even with the belt being tightened overall, the government budgets cuts will require the department secretary to source an extra $1.9 million.

Because neither the EPA nor the DEQ will have the financial strength to do the necessary research, attorney John Green has testified that “change will likely come through legal action”. This puts the pressure on legal firms such as Hall & Green Law and Napoli Shkolnik PLLC to once again ensure that the water in Wilmington is safe for human consumption.

While the lack of funding makes it even more difficult to research effective filtration methods, it has been determined that those already implemented by municipal water facilities are wholly inadequate.