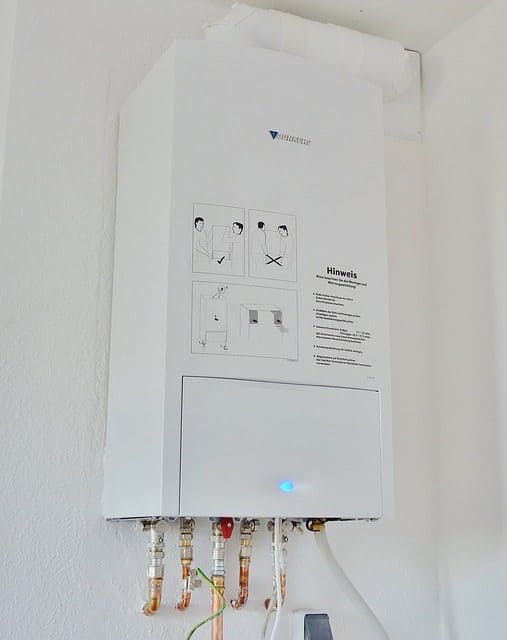 Tankless water heaters use a powerful heat exchanger in order to raise the water temperature. Heat exchangers transfer heat from one source to another, and can be found in air conditioners, refrigerators, and car radiators.

In the case of tankless water heaters, electric coils or a gas-fired burner is activated by an incoming flow of water, and transfers the heat to your water. The incoming water circulates through the tankless water heater when you turn your hot water tap on, activating the exchanger and heating your cold water to a preset temperature.

While whole house tankless water heaters are able to heat water for multiple outlets simultaneously, they’re also much bigger and more expensive. These aren’t real negatives in the long run, but their longer lag time can be. That’s because, in larger houses especially, the lag time for whole house tankless water heaters can be rather significant – even several minutes long.

A final means of distinguishing between tankless water heaters is in their power source. As mentioned earlier, there are electric as well as gas models on the market, with the latter running off either propane or natural gas.

Pros and Cons on Tankless Water Heaters: What are the advantages of a tankless water heater?

The long-term energy savings are one of the major benefits of tankless water heaters. In fact, it’s one of the top reasons many people are making the switch! Even though they may cost more initially because of the installation costs involved, the operation costs are much lower because you aren’t spending money on power to heat up a geyser tank full of water – never mind keeping that water warm. According to the US Department of Energy, in the average household, hot water typically makes up about 20% of your annual energy bill. As we mentioned earlier, switching from a traditional boiler to a tankless water heater can save you between 21% and 43% of these costs in a year! Energy.gov puts the figure at around 24% to 34% improved energy efficiency. Even homes with a high hot water consumption rate will benefit from these savings.

The average traditional boiler system has a lifespan of about 10 years. With proper maintenance, a tankless water heater can easily last 20 years.

Using the example of the shower once more, you very likely know the pains of having to settle for a cold one because the rest of your family beat you to the bathroom. But because tankless water heaters provide hot water on demand, you no longer have to worry about waiting for the hot water to get hot again! As we explained in our previous section, tankless water heaters work on your water flow rate – which means you can generally expect to have an indefinite source of hot water provided your flow isn’t interrupted. Most tankless water heaters boast a rate of two to three, or even five, gallons a minute – which means you can shower while your washing machine is doing a load at the same time.

Advantages of a tankless water heater: No Leaks or Bursts

You’ve probably experienced water damage from a burst geyser before. It’s an expensive, destructive occurrence that we can all do without! With a tankless water heater, there’s very little risk of a leak because there’s no water being stored by your heating system. Of course, you might still get a burst pipe, but that’s a different subject altogether.

Let’s be honest – geysers are huge, often storing around 50 gallons of water at a time. That takes up a lot of space, and while most geysers are stored in your attic or basement, some smaller houses – and apartments especially – have the geyser openly stored in the bathroom. Tankless water heaters are far smaller, and you can easily fit them into the cabinet below your kitchen sink – or the bathroom cabinet above. Less water heater storage space means more space for your own items, which is always a huge plus.

We mentioned earlier that you’re able to preset the temperature you want your tankless water heater to produce. Many are even remote-controlled, and have up to four different settings! But another great benefit in terms of your temperature control is that tankless water heaters use a bypass valve and a mixing valve. These provide temperature compensation, which eliminates the age-old issue of having your water pressure and temperature negatively affected with continuous use over time.

Okay, So What Are the Disadvantages of Tankless Water Heaters?

It’s sad to say, but there’s no such thing as the perfect solution. As great as the pros of tankless water heaters are, there are a few disadvantages too.

Although tankless water heaters will help you save money in the long run, they are typically more expensive initially. Depending on your model and who installs the unit for you, you’re looking at spending between $2800 and $4500 for the installation alone. You’ll also need to have some retrofitting work done, because homes typically aren’t built with tankless water heaters in mind. That adds to the initial cost too. All-in-all, you could be looking at spending up to thrice the amount you would on a traditional water heating system.

Although having a tankless water heater means you can enjoy unlimited hot water on demand, they do typically require a minimum flow rate of about 0.5 gallons per minute to be activated. This is where that lag time we mentioned earlier comes into play, even with point of tankless water heaters.

If you’re thinking long-term, then the initial cost won’t be much of a con for you – especially if you save up while waiting for your boiler to reach the end of its lifespan. But one major disadvantage to tankless water heaters is that if there’s a power outage, then you’re out of hot water too. Boilers typically store about 50 gallons of hot water at a time (depending on size and how much you’ve already used, of course). But with a tankless water heating system, you don’t have that fallback in the event of a power outage.

Scale is a consideration for all water heating systems.

With the tap water quality being under so much question, it shouldn’t surprise you that mineral-heavy hard water results in a scaly mineral build-up, typically of calcium and magnesium.

Scale is a very common problem in both traditional geyser systems and tankless water heaters. It can lead to decreased efficiency, premature damage, or even break your water heating system over time.

The hard water that leads to scale presents some issues of its own, although there aren’t any known health risks at present. Scale itself is unlikely to cause any real health issues, but it can cause damage to your water heating system, pipes, shower heads, and faucets. That’s why you most certainly want to make use of a tankless water heater filter with scale protection.

Right in the beginning, we promised that we’d explain exactly why you need a scale filter for tankless water heater. That time has come.

How Does a Tankless Water Heater Filter Work?

Siliphos is first and foremost a scale inhibitor, which is why Premiere Sales is able to provide tankless water heater filter with scale protection. The molecular structure of Siliphos prevents scale from forming, and will also loosen any existing deposits so that they may be flushed away by the water flow over time. It should be noted that brown scale (formed by iron oxide and hydroxide) can be totally removed over a period of 4 days to 6 months plus. White scale, on the other hand, which is caused by calcium (carbonate and/or silicate) is less affected, but is effectively prevented from building up any longer.

Final Words on Having a Tankless Water Heater Filter

We have a wide range of scale filter for tankless water heater available, suitable for both point-of-use and whole-house systems.
Why not make the smart choice? Your satisfaction is guaranteed!