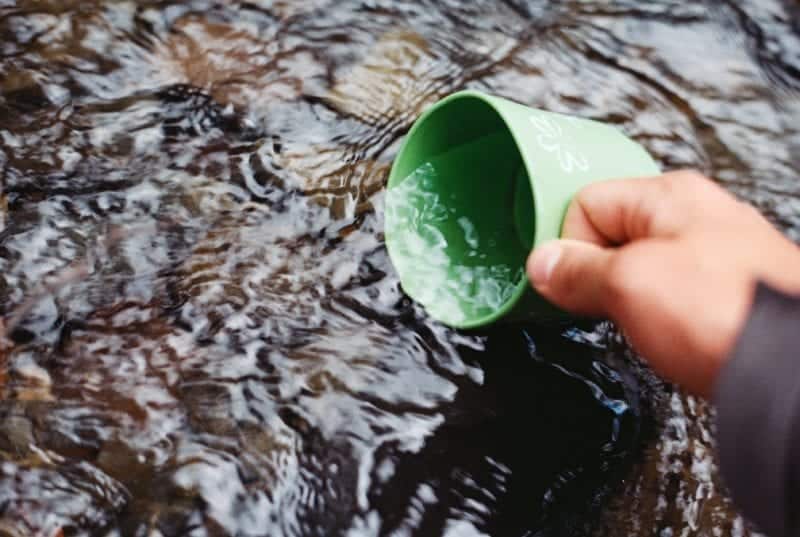 Silicon Valley Raw Water Trend: What is the raw water movement and why drinking raw water could kill you.

Raw water, also called off-grid water, is unfiltered, unsterilized, untreated water. It’s natural water found in the environment in which nothing (including minerals, ions, particles or living organisms) has been removed. The raw water movement may sound like the answer for people looking to get off the water grid, or those who are extreme about health, but the reality is that raw water can be extremely dangerous.

TLDR version of the Silicon Valley raw water trend: As appealing as off-the-grid water may sound, don’t believe the misinformation of the raw water movement. Raw water is untreated and unfiltered water, and drinking raw water could cause serious illness or even death. Fact. Please stick to treated, filtered water folks!

Awareness of the Silicon Valley raw water trend all started in 2018 with an article by Nellie Bowles in the New York Times. A food cooperative in San Francisco’s Mission District was selling this unfiltered, unsterilized, untreated water for a shocking $36.99 for 2.5 gallons. That’s $14.80 per gallon! For those not aware of the going rate for a gallon of tap water these days, it’s pennies. In San Francisco, tap water is 3 cents per gallon. Thus the origin of the Silicon Valley raw water trend.

A refill of Live Water in a San Francisco cooperative may cost as low as $6 a gallon, but that’s not cheap (hey, clearly we aren’t from the Silicon Valley). If you drink a half gallon of water per day- the average amount of water per day people drink- that’s $1,022 for raw water per year. Again, San Franscico tap water is 3 cents per gallon meaning the same amount of water costs less than $5.50.

Of course, some would argue “ew, tap water.” So although a water filtration system does require some investment and filter maintenance, it still only adds pennies per gallon when the total costs are divided by the number of gallons over a year. Essentially, that same amount of filtered water can cost as little as $9 per year for pure, healthy, filtered water.

In mid-2017, Australian real estate mogul Tim Gurner made news across the world when he told millennials that if you want a house, stop buying avocado toast. “When I was trying to buy my first home, I wasn’t buying smashed avocado for $19 and four coffees at $4 each,” Gurner said. Nor was he paying $39 for raw water we reckon.

That price indicates raw water must be the crème-de-la-crème of water as it out prices the most artisanal of artesian waters. But what does raw water taste like?

Kevin Freeman, a shift manager at the Rainbow Grocery Cooperative in San Francisco, told the New York Times that raw water “has a vaguely mild sweetness, a nice smooth mouth feel, nothing that overwhelms the flavor profile.”

Freeman goes on to explain, “Bottled water’s controversial. We’ve curtailed our water selection. But it is totally outside that whole realm.”

We understand and agree that bottled water is bad for the environment (plastic bottles) and can be harmful (lots of bacteria in plastic water bottles if they’re reused). However, the Silicon Valley raw water trend (or the raw water movement) of selling it in fancy glass containers is not the answer to this problem.

The silly minds behind the Silicon Valley raw water trend

There is the belief that “natural” is better which has resulted in many other food and health trends in recent years. “Natural” is viewed as pure, a lack of processing, or rejection of modern medicine which appeals to many. Some of these trends are crazier than others of course, with the raw water movement / Silicon Valley raw water trend being some one of them. The raw water movement outdates the Silicon Valley raw water trend.

It’s mindboggling that Silicon Valley entrepreneurs have found a way to market drinking water at $36.99. Not only that, but Silicon Valley raw water stockists can’t keep enough on their shelves it’s so popular. So who bottles and markets this ridiculously expensive raw water? A small company based in Oregon called Live Water. They’re not the only raw water company though, there’s also Tourmaline Spring and Summit Spring in Maine. This indicates the raw water movement is more than just the Silicon Valley raw water trend.

Looking at Live Water’s website – to be honest, for the price they are selling their water for, one would expect a lot nicer f a website- let’s just say it doesn’t exactly say, “trust us, we’re health and/or water experts.”

On their website, they do sell raw water for as low as $12 per 2.5 gallon jug (when you order twenty jugs) so it’s not as pricey as the going rate in Silicon Valley per se.

They sell 2.5 gallon dispensers, $69, which are absolutely beautiful. Instagram perfect you could say. There’s also a bamboo shelf, $64, which holds three dispensers and is very attractive (although the view is not included).

A lot less attractive is the $44 counter stand. Even though it is strong plexiglass construction apparently, it’s a bit sore on the eyes… columns aren’t my thing maybe. But good news: for $111 they will fill those empty plexiglass columns with our choice of crystals: clear quartz, blue fluorite, or purple amethyst.

Yes. This had us scratching our heads too. It seems Live Water is trying to sell a Instagram lifestyle of beautiful glass orbs in addition to their cockamamie raw water movement.

Getting back to the raw water, there is also Zero Mass Water, a start-up from Arizona, which created a completely off-grid and self-contained “hydropanel” that makes drinking water from sunlight and air.

Again, all this raw water movement sounds super environmentally friendly and healthy – drinking water from sunlight and air?…sounds like the purest thing ever! – but untreated water poses serious health risks for those who drink it.

Live Water states it is “fresh spring water sourced from Opal Spring in Madras, Oregon.” Opal Spring is actually a municipal source part of the Umatilla Water District…so much for being truly off-the-grid.

“Since our water is alive and abundant with healthy microflora, it is imperative that we keep it from reaching sweltering conditions. Unlike sterile water, our water will turn green if exposed to excessive heat and sun light. To guarantee unparalleled freshness, we keep our water chilled in our storage facilities and vehicles till final delivery. We recommend storing Live Water away from direct sun light, and in a cool location. Our water is delivered within 2 weeks of collection, and will stay absolutely fresh for one complete lunar cycle after delivery.”

We’re not sure where to begin [eyes still rolling uncontrollably], but perhaps with the “our water will turn green if exposed to excessive heat and sunlight.” If raw water can potentially turn green, there are definitely microorganisms in the water you don’t want to be putting in your body!

And their raw water freshness guarantee: one complete lunar cycle.

(To clarify, a complete lunar cycle takes one synodic period to complete, and there are 29.531 days is the synodic cycle of the moon. Groovy).

But their raw water is “rich in silica” they say, and “silica is good for your skin.” Silica is in fact, good for skin, but it’s important to point out that silica is not unique to raw water. You can still have silica and all it’s benefits in treated water if you so wish without the harmful risks unsterilized water poses.

So to sum it up, raw water will turn green if exposed to heat or sunlight and is best drunk within thirty days (we’ll round up that 0.469 of a day)? Again, that just screams there could be something icky going on in that water which doesn’t seem like a stretch since raw water is untreated and no microorganisms have been removed.

The benefits of Live Water’s raw water are:

Filtered, treated water has these healthful benefits without the price tag and especially without the risk of getting seriously sick from diseases spread through water.

The Live Water website even has a disclaimer that their statements have not been evaluated by the FDA. Let’s get real: the FDA would be crazy to approve or endorse raw water because raw water is a stupid and dangerous not-so-heathy “health craze.”

Raw water can make you sick. Like really sick. Or even kill you.

Bill Marler, a food safety expert, told Business Insider, “Almost everything conceivable that can make you sick can be found in water.”

Water that is unfiltered, untreated, or unsterilized can have animal feces, which spreads Giardia. Giardia has symptoms such as vomiting and diarrhea and causes thousands of hospitalizations a year.

Another harmful disease that can be spread through water if it isn’t treated is Hepatitis A. Hepatitis A is an infectious disease of the liver  which caused 20 deaths in a California outbreak in 2017.

E. coli, cholera, and a whole host of unpleasant diseases can also be transmitted via untreated water.

Fortunately, treated water has become the norm in America so most people don’t understand how dangerous raw water can be.
“The diseases that killed our great-grandparents were completely forgotten about,” Marler explains.

So are the supposed benefits of the raw water movement greater than the risk of Giardia, Hepatitis A, E. coli, cholera, and other dangerous water-bourne illnesses? Surely not.

Sterilized water has undergone a process that eliminates, removes, kills, or deactivates all forms of life and other biological agents (such as bacteria, viruses, and more) present in water.

Treated water means that the water had undergone some process to filter or sterilize it.

There’s a bit of overlap between these terms. For example, drinking water can be filtered and sterilized, meaning it’s treated also.

Say no to the Silicon Valley raw water trend / raw water movement, and check out these recommended water filtration systems:

Premiere Sales is family business that has been helping customers since 1997. We carry a wide range of water products including water filtration systems, replacement water filters, drinking water faucets, parts and accessories, and more. Our friendly, knowledgeable water filtration experts can answer any of your water treatment questions. We have speedy processing with most orders shipped the same day. And to top it all off, our prices are simply the best. Clean, great tasting water is just a phone call away – call us on 1 (800) 817-6306 right now!